About the "Icaro" or Shamanic Chant

Icaro is the word used by the peruvian shamans or curanderos, to describe the shamanic healing song that is the weapon, tool,  wisdom and personal energy vehicle  of the shaman,what is carrying his /her power.

The 'action of ICARAR "means" loaded "with the power of an object or shaman potion, giving some specific property to be transmitted to the receiver, either cleaning, protection, healing, harm or influence on his/her will.

This is done singing the Icaro directly on the object or transmitter substance. The object then be forwarded to interested and ingested in the case of liquids (potions) or blowing smoke if snuff is icarado.

The icaro is the vehicle of the energy that the shaman is using, their efficiency depends largely on the preparation of the healer through diet, intake purging system integration life of ancestral wisdom. 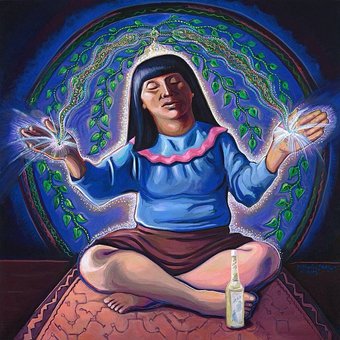 Each shaman is the owner of their icaros, experience and wisdom, for having received from its teacher or directly from nature. It is common for healers express things they know, including icaros that have been learned in dreams or visions or they have been given by the plants. They say that in these states of consciousness induced by the "plant teachers" have caught the tune, without any effort or reasoning, feeling that imposes itself and often in an unknown language. Also in some healing cases the icaros arises in the same way.

Neither words, neither understanding of the lyrics  are essential, but yes the melody and that the healer feels, to share his /her spirit. If you let the Icaro take part in yourself, you will know when, how and with whom to use.

It is now found in many icaros syncretism Christians and biblical allusions. Most of them are written in Castilian, Quechua and other dialects as the origin of the old masters, but some are just very monotonous and repetitive melodies.

How icaros works? We could say that like the Mantras in Eastern traditions does ,on certain energy centers through sound vibration, thus modulating organ function, and that there is a subconscious knowledge that guides the shaman to choose the right Icaro to each circumstance.