-The vine of death-

Ayahuasca (Banisteriopsis caapi) is a vine of the jungle, which grows in the entire Amazonia, from Columbia to Peru, Bolivia, Brasil and Guyana. It is known to and respected by all indigenous peoples as a healing plant or master “teacher plant” and represents the basis of their traditional medicines.

Ayahuasca is boiled together with the leaves of a shrub called “Chacruna” (Psychotria viridis), giving a brew or sacred drink the light for the visions can be reach, character that is consumed in a ritual ceremony leading to reflection and cleansing. This brew, named also Ayahuasca, has been used for more than 5,000 years by the shamans of the Amazon as a way to reach amplified states of consciousness. 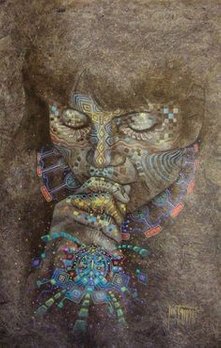 Although it contains a psychoactive component  (DMT), Ayahuasca cannot be considered and condemned as a classic drug of addictive and negative effects. On the contrary, we must ensure that its consumption never happens within a recreational or playful context.

The norm of its use places it within a ritual controlled context of sacred, spiritual and therapeutic characteristics that lead us to a process of deep introspection revealing both agreeable and suppressed experiences, for which the use within a recreational, playful or compulsive context is inadmissible.

The plants are called "hallucinogenic" by the Western, American and European science an inappropriate term. "Hallucination" means cheating of the senses, which is incorrect to define the main effect of these plants, which, on the contrary, generally consists of an Amplification of the senses and consciousness.

The vast majority of persons who consume it, indigenous settlers, shamans, healers, psychologists, therapists, drug-addicted patients, spiritual searchers, religious people and interested ones in general, do not consider this plant to be a drug, but a tool for introspection, meditation, therapy, inner cleansing, auto- exploration or a sacrament.

Cooking Ayahuasca is a ceremony

Ayahuasca is taken orally. The taste is generally described as being intense and unpleasant, which marks the beginning of the physical change that ayahuasca provokes. In about 15-60 minutes, the ayahuasca induces an altered state of consciousness, in which the person frequently experiences highly emotionally charged visions.

The experience can bring up recollections and images of one’s past. Repressed memories can also come to the surface. Individuals can work with this material, restructuring related thoughts and emotions and integrating them in their current way of living life. The experience can also include archetypal, transpersonal, mystical and perinatal content.

The effects of ayahuasca are emetic, frequently causing vomiting and diarrhea, which is interpreted by the shamans and other providers of sessions as what is called the ‘purga’: an emotional and physical cleanse. The principal effects of ayahuasca wear off after approximately 2 - 4 hours after ingestion, although they can become prolonged if there are several administrations. Once the effects subside, they make space for residual effects of fatigue and introspection. From the physiological point of view, ayahuasca moderately increases the heart rate.